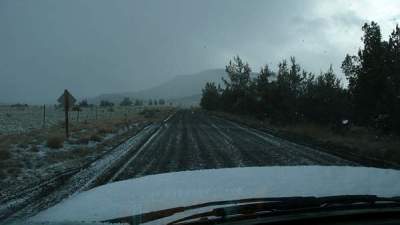 I have remarked before that Larry Tamiyasu is a very dedicated stillwater fly fisher from Oregon. He started the season in the snow from one lake to another and finished (well who knows…if it isn’t frozen over, he may still be there) the season in the snow. This beautiful rainbow fell to a black leech in the Spring on a very chilly day. This fish and others went back to the depths, unharmed. And, no, it was not a pay lake. You will note the top of Larry’s head was cut off. The photographer took the liberty of cropping the shot to eliminate the bizarre stocking cap that Larry is often seen wearing. I told Larry that, today, pink is not an uncommon color for a man, but perhaps a more somber color on stillwaters is in order. Actually, I have no idea why it was cropped that way, a misplaced tree, inappropriate logo on a trucker’s hat or……………….? No matter…the fish captures your gaze, doesn’t it?