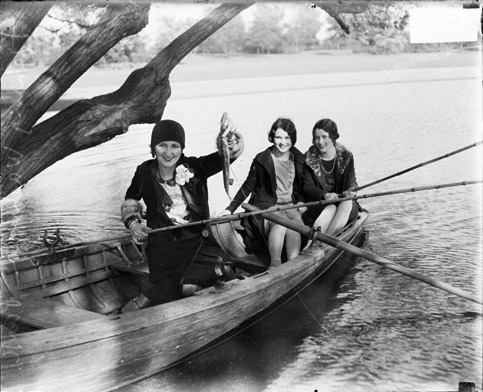 “Women have been under the thumb for many centuries. We have been controlled and ordered around by men for more than long enough. Modern women are forging their way ahead, paving the way for others like them. They are coming into their own and striving for equality in a still largely patriarchal world. One such corner of life in which women are making their mark is in fly fishing….Female fly fishers are a very real part of this sport, whether men like it or not….The internet is also filled with information and advice for female fly fishers. This makes picking out the right type of women’s fly fishing gear easier and hassle free because you don’t have to consult men in order to get yourself savvy…In order to get anywhere, women need to embrace each other and stand together.”   Women & Fly Fishing

I believe the above was written  about 2000. One woman’s opinion? Still a dominant opinion of women fly fishers? Do men really resist women joining the sport? I suppose somewhere there are men who are threatened. I don’t know of any. Probably more prominent is the opposite force…men so enjoy the appeal of a woman waving the stick that they provide unwanted attention and sexual energy toward the woman. The woman wants to be left alone to enjoy the sport. She does not view it as a means of meeting men. It is not a red flag endeavor to entice men. Or is it? Whoa! you say. I do recall two very attractive women that took a class from me for the express purpose of meeting men. They further had it dissected with men that fly fish will have a higher income level. The two women were also taking golf lessons. Exception to the norm? Yes, of course.

For myself, women in the sport are a great addition. Yes, an appealing one. Yet, I know instinctively to respect their individual need to enjoy the same qualities of the sport that I seek. I have the initial appreciation for a calendar showing nubile, half naked babes holding a fly rod…but, they aren’t real. They are mostly fantasy. Real women, not the half naked in hip waders girl, looking lost with a rod in hand, but real women we see all about us. I respect their desires to enjoy all aspects of the sport. I hope the strident tone above is less significant in the female angler’s world view today. I hope men can let women be long enough to let them appreciate the sport on their own.

3 thoughts on “Fly Fishing: Women Banding Together To Dip Their Collective Toe?”