In the mayfly pattern below, I wound cream colored (bleached) peacock herl for the abdomen/thorax. I then used a black permanent marker to mottle the body save the rear area, which I wanted to represent the egg sac of a female. A female what? Note the wing is dark as well, touched up with the same permanent marker on the antron post.

But, if I am not mistaken, a female preparing to lay eggs has already progressed through the hatch (dun, darker wing phase) to the spinner phase (mated, wing clear/glassine, preparing to lay eggs and go spent on the water). So, my wing color, if attention to detail is important, is the wrong color.

Now, in this tie, the wing was not touched up but remains clear/white to better represent the spinner wing. A spent spinner wing is not upright, but rather outstretched to the sides, almost airplane wing style. This pattern is more of the egg laying female setting down upon the water to lay/deposit eggs then try to lift off. 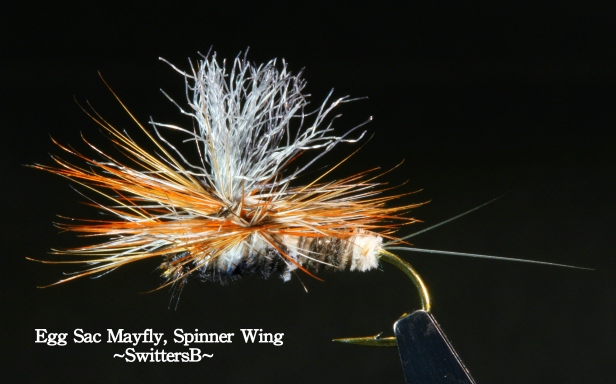