In a remote, rocky, little draw off the Columbia River, we decided to explore to maybe find a rock formation to photograph. It was an odd spot, not really near anything, well off the road and one of nature’s divots that would not lend itself too much for mankind’s use. But, I had neglected to consider womankind’s use. 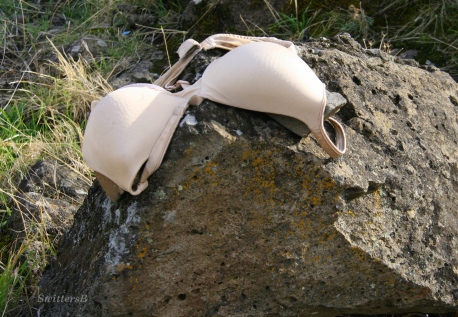 Now as some of you no doubt know, I am big on highlighting Portland’s repurposing movement. You maybe recall the couches, chairs, TV’s, furniture, clothing….the ‘free stuff’ sitting out in the rain and snow? Always near rentals, it seems a convenient way of sharing stuff that one is just too impeded to load up and take with. Perhaps my tone is not coming through clearly. Let me add a clarifying phrase I often utter when driving by such drops “What a bunch of bullshit. Lazy bastards”.

Well who would have thought a bra, a daintily placed bra, fastened (maybe someone zipped that baby right up over those extended arms?) piece of apparel would be displayed so gracefully atop a rock where few women tread. 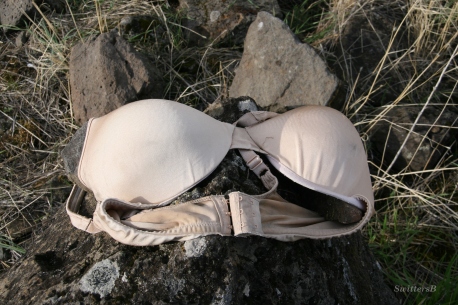 Now this is one of those posts where the properly selected tags could draw more visitors. Taking all the derivatives for breasts would certainly boost the draw to SwittersB, but I just can’t let myself do that. But I digress.

So, was this a repurposing of lingerie? A forgotten piece of a scavenger hunt? Someone stumbling away in the dark, impaired and forgetting their bra or someone just saying ‘enough of that damn thing…I’m free and it feels good?’ Well it is still setting there, in the approaching Winter’s weather, free for the taking. Ah, the discoveries of photography and hiking.

5 thoughts on “Photography: Repurposing Bras Or Just Had Enough?”